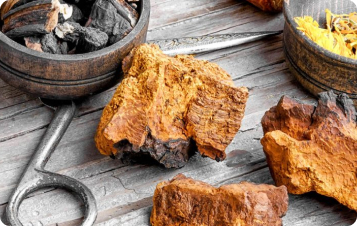 In fact, this is, as usual, the secret of the Polichinel. The general direct antiviral activity of chaga extracts against orthomyxo-, corona- and other families of viruses is known and has been shown for 10-20 years. The fact that in this situation it works specifically against a new type of covid is quite natural. That is why we started selling the appropriate antiviral drugs in our mushroom pharmacy (a couple of months before the “discovery” of Novosibirsk scientists). Chaga is a unique mushroom in the sense that it is equally excellent at suppressing fungi, bacteria, and viruses. In the case of viruses, the most active component is a black crust with a subcortical layer (something that was previously considered useless). Now a little more detail.

As you probably know, chaga is not the fruit body of the tinder, but the so–called sclerotium. From the outside it is covered with thick black outgrowths, similar to pieces of coal put together, merged at the base. This is a real armor that protects against weather conditions and pests. In the cracks between the outgrowths, yellow- or golden-brown pulp, the medicinal core of sclerotia, sometimes peeps through. The outer part of the black crust is more or less pure chitin (chitosan). However, the inner layer of the pulp adjacent to chitin about 0.5-1 cm contains a huge amount of triterpenoids (mycosterols) – betulin and its derivatives with direct antiviral activity. This activity has been confirmed not only on coronavirus, but also on influenza viruses, herpes, HIV, hepatitis, smallpox, papova viruses (papilloma, condyloma, leukoplakia, verucosis), and even on pet viruses (for example, feline retroviruses). According to the latest major review of the pharmacological potential of chaga and the molecular mechanisms of its action (Duru K. C. et al., 2019), many preclinical trials have been conducted in major research centers, primarily in order to try to understand the molecular mechanisms of the effect of chaga extracts on the relief of a number of metabolic diseases, cancer and various viruses. Experimental data confirm that the extracts have high antiviral and immunostimulating properties and, among other things, make it easier to tolerate the current disease. It has been proven that betulin and its derivatives have antiviral activity.

Now many Western laboratories are conducting research in the development of drugs based on chaga for use in the treatment of HIV/AIDS, several types of herpes and respiratory syncytial virus (RSV). In addition, betulin reduces hypoxia (insufficient supply of oxygen to tissues) and increases the body’s resistance to lack of oxygen, contributing to the correction of the metabolism of oxygen-containing cells (for example, cells affected by viruses). In addition to the direct antiviral effect, chaga really stimulates the immune system, showing an immunomodulatory effect against cytokinins and interleukins and increasing the production and activity of macrophages and natural killers, and at the same time increase the synthesis of interferon. That is why chaga is good after severe illnesses and operations as a general tonic and a means to increase the body’s resistance to infectious bacterial and viral diseases. Antiviral mycosterols of chaga are best extracted in alcoholic tinctures (they are practically water-insoluble).

Water-soluble polysaccharides of chaga also give some antiviral effect, but they are far from triterpenoids. That is why the best form of administration for antiviral purposes is a fine powder of chaga or its alcoholic or vodka extracts (ideally, a double extract). In the end, as a highlight, I will give you an example of a homemade recipe that has now gained extraordinary popularity in the West. This is a drink that gives super-susceptibility to all kinds of diseases of bacterial and viral nature. So, take: chaga tea — 2 liters; birch bark — 2-3 strips; fresh spruce needles — a small handful; fine—ground chaga powder — 1 tbsp. l.; fine—ground reishi powder — 1 tbsp. l.; phycocyanin (blue pigment from spirulina) – 2 tbsp. l.; honey – 2 tbsp. l. Place all dry ingredients and honey in a blender. Pour in the same mushroom tea (it can be any temperature comfortable for you — from cold to hot) and mix.