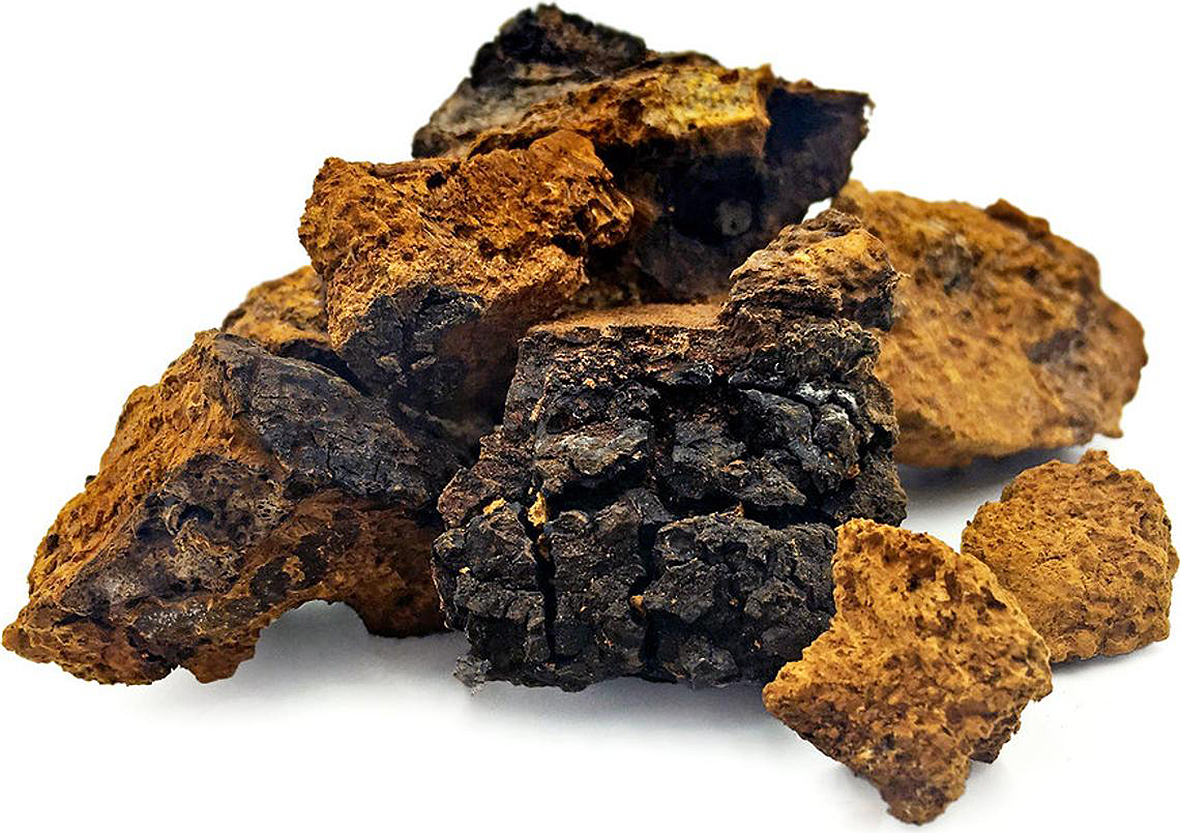 For many centuries chaga and its infusions are used by the Russian population as a means to improve the quality of hair, nails and skin and as a medicine for them. Relatively recently, these qualities of chaga were appreciated by the world cosmetology industry. Now chaga is included in creams, gels, lotions, shampoos, soaps, scrubs and masks. Extracts of chaga containing a high amount of melanin are added to shampoos, conditioners and cosmetic milk (cream). Such cosmetics help strengthen hair follicles, restore the structure of damaged hair, eliminate inflammation, fragility and split ends, stimulate skin renewal and healthy hair growth.

With rare exceptions, chaga is not the only active component of a cosmetic product, usually manufacturers add other natural ingredients to it, including bioactive extracts of fungi and plants. For example, in the manufacture of chaga soap, some manufacturers add extracts of a series or reishi. At the beginning of 2021, our mushroom pharmacy will offer an innovative therapeutic and cosmetological line based on chaga.

In the meantime, let’s look at what substances of chaga are useful for our integuments and how they work.

Betulin – the famous triterpenoid – is contained in birch bark and migrates from there to chaga. Chaga partially leaves it as it is, and partially translates it into more bioavailable forms for us. No wonder cosmetics manufacturers (especially American ones) have long started adding birch bark extract to various skin care products. The main task of betulin is to protect the skin. Remember: a dead birch tree is lying in the forest, all rotted inside, and the birch bark on it is like fresh. This betulin prevents fungi and bacteria from developing. In the case of the skin, betulin and its derivatives (betulinic acid and lupeol) fight local infections and irritations, enhance the immune response, have an anti-inflammatory effect and simultaneously stimulate the growth of healthy skin cells. Betulin helps with wounds, injuries, burns, frostbite, juvenile acne, inflammation and peeling of the skin, insect bites.

Like betulin, lanostane triterpenoids are beginning to be used in therapeutic and cosmetic preparations. Interesting research was conducted by a Japanese working group from Tokushima University (Tokushima, Japan). They analyzed a homemade traditional chaga shampoo, which is used in Mongolia to maintain hair health. As a result, it was found that the active components of the shampoo affecting the hair follicles were five lanostane-type triterpenes, including lanosterol, inotodiol, lanost-8,24-diene-3b,21-diolitramethenolic acid (all these substances are only in chaga). Experimenting with chaga extract, the Japanese have shown that its proliferative effect is more powerful than that of minoxidil, which is popular today, a well-proven and very popular hair extension agent. Therefore, if you are struggling with alopecia or just want your hair to be luxurious and radiant, use shampoos based on chaga.

In chaga there is ergosterol, a precursor of vitamin D2. Ultraviolet light converts ergosterol into viosterol, which is then converted into vitamin D2. It has been experimentally shown that if we dry large pieces of fresh chaga in the sun, the residual vital processes in the fungus are enough to accumulate vitamin D2 in the tissues. Vitamin D3 is synthesized in our skin under the influence of direct ultraviolet light, it is absorbed within 24-36 hours after formation. Vitamins of group D are necessary for the creation of new skin cells and for the normal growth of bones, teeth and hair.

These are polysaccharides responsible for skin regeneration and have a restorative effect on the skin and hair.
The antioxidant activity of beta-glucans is another of their remarkable medicinal properties. If a tumor develops in the body, as a result of stress, this leads to the appearance of a large number of free radicals. Under the influence of beta-glucans and other biologically active substances of chaga, the immune system comes out of a state of shock and begins to work actively. Therefore, one of the first actions that can be noticed at the beginning of taking chaga or other drugs with beta-glucans is to reduce the level of oxidative damage and stress caused by free radicals. And that, as they say, is not all. Even oxidative damage caused by external factors (for example, burns or exposure to chemically aggressive substances) can be effectively treated with both local and systemic administration of beta-glucans. Studies of their antioxidant properties have shown that they are able to organize even the protection of cells from radiation. Due to the high commercial interest in the ability of fungal beta-glucans to actively influence the regeneration and healing of the skin, numerous laboratory studies are currently being conducted in this direction. For example, a few years ago, the following data were obtained in one of the US laboratories: the effect of a cosmetic preparation containing beta-1,3-glucan on signs of skin aging was evaluated in 150 women aged 35 to 60 years; skin hydration after eight weeks of cream application (twice a day) improved by 27%; noticeable reduction of wrinkles at the end of the study reached 47%, firmness and elasticity increased by 60%, and skin color improved by 26%.

In addition, data have been obtained indicating that beta-glucans protect the skin from burns with preliminary local and internal use. They play a significant role in this effect, about the same as melanin. That is why chaga has a special affinity for fighting melanomas (skin cancer) and other skin diseases, including psoriasis.

According to the research of I. B. Mosse (Belarus) and L. P. Zhavoronkov (Russia), melanin is a unique basis for the prevention of genetic and ontogenetic consequences of radiation exposure. The special value of the research is that the experiments were conducted in vivo. Melanin reduces the accumulation of radionuclides in the body by actively binding uranium and transuranic elements; it is one of the most powerful known antioxidants, giving these properties to chaga. With regular use of chaga, the level of damage to skin cells by penetrating radiation and radioactive precipitation decreases, and radioactive isotopes are transferred to a safe form. These data were obtained during the study of the consequences of the accident at the Fukushima nuclear power plant (Japan).

Chaga contains more melanin than any other mushroom. This is the best natural source of pigment of all possible, and in the form that is closest to the human body. Often with age, due to stress, genetic failures, lack of minerals and for other reasons, the balance of melanin synthesis in the skin can be disrupted, which leads to the appearance of white or dark spots, including, possibly, vitiligo (now this disease is associated with the combined effects of stress and an unknown virus). Due to the presence of melanins, cosmetic preparations of chaga effectively protect us from many troubles, such as skin cancer (melanoma), exposure to ultraviolet radiation, penetrating radiation, high temperatures and chemical stresses, and even the threat of biochemical invasion, since they increase immunological protection against all kinds of pathogenic microorganisms. Melanin promotes beauty, healthy shine and improves the appearance of hair, nails, skin and eyes, helps to restore and maintain a younger appearance. As you understand, the inclusion of chaga in a permanent diet will make up for a possible lack of melanin or reduce the load on the body engaged in the extraction of substances necessary for its synthesis. This will positively affect hearing, the pineal gland and adrenal glands, the immune system, and the quality of the skin.

As a result, we can say the following. Due to the high concentration of melanin and the content of antioxidants and beta-glucans, chaga is effective in eliminating signs of skin aging (wrinkles and weakening of tone), photo damage, dark circles and puffiness around the eyes, scars, skin fatigue, acme, enlarged pores, poor blood microcirculation, symptoms of cellulite and stretch marks. It is also useful for skin damaged by chemical peeling, laser resurfacing and other cosmetic procedures. To get an external effect, it is not necessary to use cosmetics, sometimes it is enough to regularly consume drinks prepared on the basis of chaga (especially good in this regard is chaga of long-term boiling), and jelly with chaga based on gelatin (an excellent light breakfast or dessert that has immunomodulatory properties and really cares about your beauty).