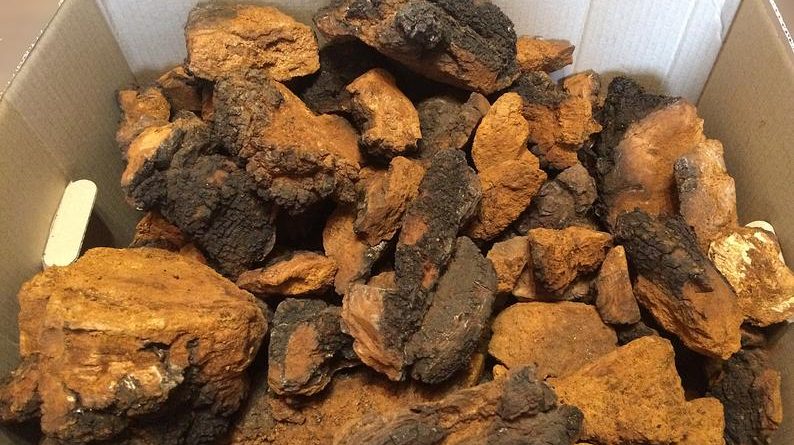 Since the last century, official Russian medicine prescribes chaga for patients with gastroenterological problems, as well as elderly people to normalize the work of the stomach and intestines. Betulinic acid, one of the main medicinal components of chaga, increases the secretion of bile from the gallbladder, thereby improving liver function, increasing digestive ability and protecting the gallbladder.

In general, decoctions, infusions, tinctures and extracts of chaga are used for gastritis, colitis, dyskinesia of the gastrointestinal tract with atony, stomach ulcer and duodenal ulcer; chaga relieves pain and dyspeptic phenomena, normalizes the work of the stomach, intestines and pancreas. With regular intake of chaga, appetite improves.
The Russian pharmacological industry produces chaga for the treatment of gastrointestinal tract in several types.

Raw materials of chaga are used in the following cases: chronic gastritis, gastric and duodenal ulcer (outside the period of exacerbation), gastrointestinal dyskinesia of the hypokinetic type, as well as in oncological diseases as a symptomatic remedy that improves the general condition of oncological patients with cancerous lesions of the gastrointestinal tract. Reception usually boils down to receiving and regular use of water infusion and decoction or a combination of them.

Befungin is a semi—empty aqueous extract from chaga. It has a positive effect on metabolic processes, promotes scarring of stomach ulcers or duodenal ulcers. The drug is also used for chronic gastritis and dyskinesia of the gastrointestinal tract with the phenomena of atony. In addition, it is used in the complex treatment of psoriasis and eczema (treatment is especially effective in cases of combination of skin diseases with various inflammatory diseases of the gastrointestinal tract, liver, biliary system), as well as as a general tonic and analgesic. The technology for obtaining the drug consists in a multi-stage extraction of raw chaga with water, followed by boiling the obtained extracts to a semi-empty state. According to the technological regulations, ethanol and cobalt salts are added to the resulting extract. Befungin is prescribed orally: 3 teaspoons of the extract are diluted in 150 ml of water and taken 1 tablespoon 3 times a day 30 minutes before meals.

Tincture of chaga, also known as gastrofungin, is a tincture of ethyl alcohol, which is obtained by boiling raw chaga for two hours in alcohol with a strength of 70%. It is recommended as a general ionizing drug for chronic gastritis, gastric and duodenal ulcer (without exacerbation), biliary and intestinal dyskinesia, colitis (symptomatic therapy) and malignant neoplasms (symptomatic therapy, to improve overall well-being). The tincture is taken 20-30 drops 2-3 times a day 30 minutes before meals, with a small amount of water.

The properties of befungin and gastrofungin are combined in our preparation “Chaga: double extract”.
Do not forget that there are dietary fibers in the sclerotia of chaga: water-soluble and water-insoluble. Soluble fibers play the role of prebiotics. They are easily absorbed by the bacterial flora of the colon and turn into gases and physiologically active by-products. Insoluble during the journey through the gastrointestinal tract are pumped with water and eventually facilitate defecation.

Laboratory analysis of chaga sclerotia shows that insoluble fibers make up about 60% of their total weight, and soluble fibers make up about 4%. It has been established that chaga dietary fibers improve intestinal function (many report that after regular consumption of alcoholic chaga extract, defecation has become easier), sorb and remove various slags, heavy metal ions, carcinogens and radionuclides from the body. That is why chaga is considered from the position of a preventive agent in the development of rectal carcinoma.

If you want to get real benefits from insoluble chaga fibers, it is advisable to use it in the form of a fine powder. The powder should be consumed directly (for example, in the form of capsules), since water-insoluble fibers do not come out in a decoction (infusion, tincture).